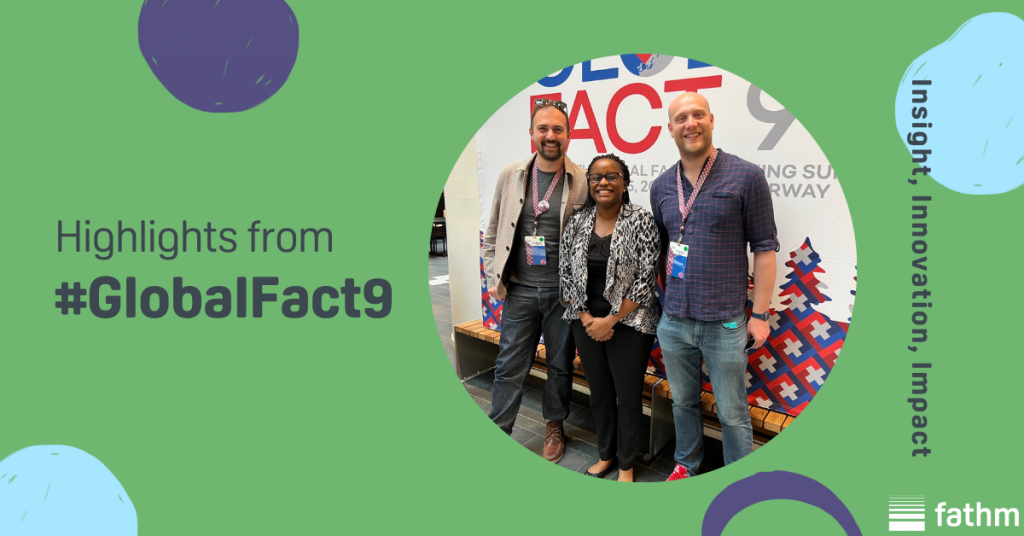 I was lucky enough to attend the ninth Global Fact conference in Oslo a week ago. The annual four-day conference organised by the International Fact-Checking Network brought together fact-checkers from around the world to discuss mis- and disinformation issues.

Two of my favourite sessions during this year’s conference were the keynote addresses by Pulitzer Prize-winning journalist Anne Applebaum, and Dr. Joan Donovan, research director of the Shorenstein Center on Media, Politics and Public Policy.

A fact isolated from context, whether it’s true or false, is almost meaningless

In her talk on the current state and future of democracy and the role of evidence-based journalism, Anne Applebaum painted a picture of how information is used as a weapon of war, using the disinformation campaign against Ukraine as a stark example.

“What we are seeing in the war in Ukraine is really the culmination of a very long preparatory period. The information war in Ukraine has been in the making for some time. The physical war was preceded by and is being accompanied by an info war that is designed to shape the way you see and understand the physical war.”

Applebaum warned that one of the dangers for fact-checkers is missing out on powerful narratives.

“So a fact isolated from context, whether it’s true or false is almost meaningless. You have to explain it or tell it as part of a story.”

Another key takeaway from this session was that networking and mutual support among fact-checkers remain some of the best ways to reach wider audiences and build trust.

“A lot of misinformation is directed at people to confirm their biases, and the danger for a fact-checking website is that they come to be seen by people who have a different point of view as part of the other side. There’s a larger job for fact-checkers. It’s about making coalitions, it’s about finding links or finding context outside of their particular milieu or their bubble. People who can transmit and convey their information. It’s about building some larger sense of trust.”

During her session on ‘the bridge between research and practice’, Dr. Joan Donovan, Research Director of Harvard University’s Shorenstein Center on Media, Politics and Public Policy shared a few principles of misinformation that fact-checkers should use.

Another key principle that Donovan pointed out is that in an active crisis, there’s no real-time knowledge, only real-time information.  I saw this unfold during the pandemic when we were all being exposed to a huge amount of COVID-19 information (and misinformation) on a daily basis, and not all of it was reliable.

According to Donovan, before a fact-checker can label content as disinformation, it is important to make sure that they understand its origin. Understanding the motives of fun, politics, and profit can help fact-checkers start to classify fact checks and their knowledge to understand the motivation of these actors.

“So when we think about media manipulation on our team, what we’re looking for is where is the lie? Where’s the manipulation? Is it in the design and the distribution of content or is it in the content itself? It’s really important for fact-checking because knowing the intent helps us assess the validity of a claim. But we raise a really high bar in terms of calling something disinformation because one person’s disinformation might be another person’s misinformation.”

A key issue that came up during the discussion was the need for fact-checking to be deeply local and contextual.

Deploying fact-checking as a product

In another panel session, journalists from local TV news broadcaster Graham Media Group and news wires The Associated Press (AP) and AFP shared how they are taking a product-based approach to deploy fact-checking.

For Barbara Whittaker of AP, the pandemic presented a real opportunity to find new ways to reach readers.

“We started Viral Questions, where the health and science team worked closely with the fact check team to knock down things in nuggets. It was very popular. One of our most viewed items was the viral questions about the vaccine. Then during the elections in 2020, we had Vision 2020 which was a play of the same thing. So these are just people who ask questions, they mail them into AP Fact Check and we just answer them. Explainers have been very popular and it’s a segment that has been growing, it’s not just the fact-checking.”

The panel also spoke on the need to maintain strict editorial guidelines to produce a product that is equivalent in terms of quality, and the need to develop products that reinforce trust.

Collaboration is key to reaching wider audiences and building trust

The need for collaboration arose in many of the sessions at the conference. From the keynote address by Anne Applebaum to the session on the divide between research and practice, many of the participants agreed that collaborative fact-checking projects have made a real difference.

My panel focused on our work debunking health misinformation through the Viral Facts Africa initiative. I was joined by Rabiu Alhassan of GhanaFact and Kemi Busari of Dubawa to discuss our partnership under the Africa Infodemic Response Alliance – a pioneering multi-year collaboration between fact-checkers and health institutions in Africa all working to limit the impact of misinformation on citizens across the continent, and ensure the public has access to reliable, engaging fact-based information across a range of platforms.

We spoke about the challenges we encountered verifying health information during the COVID-19 pandemic, and the lessons learned for the future.

Collaboration has been a powerful tool to limit the spread of misinformation, but it’s time for fact-checkers to come up with creative solutions to deliver facts. It was interesting to hear that AP has started producing explainer videos, which is something we have been doing at Viral Facts to address information gaps before bad actors exploit the uncertainty brought about by these gaps to churn out misinformation. Misinformation is not going away, and as fact-checkers, we need to go beyond debunking and find engaging ways to draw people to factual information.